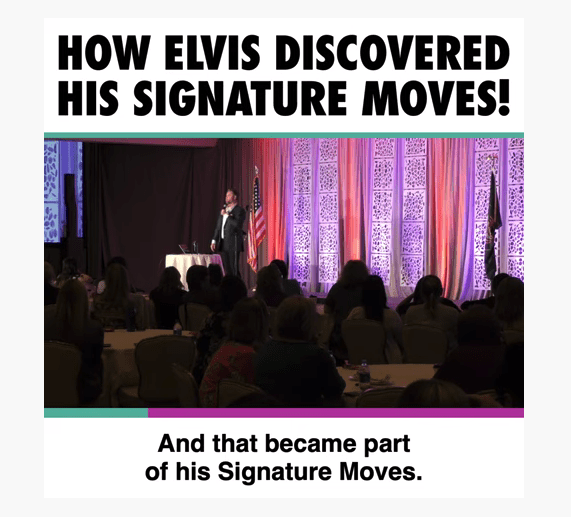 Recently I had a client asking me to return and deliver The Promise with one big change: They needed all new stories, examples and musical impressions…while still wanting the messaging of The Promise as we’d done the year prior.

Thrilled, and equally terrified, I went to work on creating a new experience for this client.

As I went through the stories of music acts that are Legendary enough to make it into my new Promise speech I realized I wasn’t touching on the greatest of all Legends, yes, even The King, Elvis Presley.

Elvis’ story and the creation of who he became is the quintessential story in music history of living The Promise.

Challenge I’ve always had is I don’t do an Elvis impression because too many people have ruined it through the years and it’s something of a running joke as to how many people try to impersonate him…and thus was born this routine (video below) I tried for the first time a few weeks ago in illustrating how Elvis is the PERFECT example of my Identify, Clarify, Magnify process when discovering our Signature Moves.

The first time Elvis entered Sun Records to record himself singing, he was asked, “Who do you sound like?”

His answer is a defining moment in Rock n’ Roll history: “I don’t sound like nobody“.

His voice and style of singing was a combination of Gospel, Rockabilly, Bluegrass, Soul, Blues, Country…and everything he loved about all types and styles of music, across all racial boundaries.  He was the first melting pot of sound in one voice and persona, and the essence of this new Rock n’ Roll.

His leg started shaking when he was on stage because he was so nervous – it became his defining movement and compelled TV producers to film him only from the waist up…further solidifying his reputation as the guy everyone wanted to see perform.

Eventually even his clothing, rings, glasses, hair, sideburn length, laughing through concerts as he tried to perform…all of it became the legend that was Elvis.

Why is this important to you?

Because you do you!  You have a unique, magnificent, beautiful sound that only you can create.  Others can try to imitate it, but no one can do your job, live your life, and share your gifts like you!

This isn’t just motivational mumbo-jumbo, this is legitimate truth telling and your Promise to the world is to Identify what you’ve got (your Signature Moves), Clarify them with others, and Magnify your Promise!

How are you bringing the best and most unique of you?

Because if you’ve hidden it away due to someone calling it “weird”, then think of Elvis and all the weird he brought to the table – it made him The Legend and The King we still refer to 70 years later – and take courage to share what is uniquely and beautifully you.

2 thoughts on “The Elvis Example”