The Promise That Went Viral: 1-Year Anniversary of Seeing My Wife at Target

You never think something you write on a whim on Facebook before going to sleep will change your life, nor be read by an estimated 100 Million people in less than a week, and end up landing you as front page news in London, China, India, Brazil, Italy, France, and every major US city.  24 hours after writing the post entitled, “I Think I Cheated On My Wife Today”, we had already been featured as the top story on The Today Show web site, written up in People magazine, and had too many radio, TV, and media requests to respond fast enough from all over the world.  Within 48 hours it was featured on The Huffington Post, Business Insider, top search on Yahoo, shared by famous actresses like Zooey Deschanel, slammed on The View, and I was being called, “The Husband Who Broke The Internet”.  72 hours later we had received 3 Reality TV show offers from legitimate Hollywood producers, book and movie offer rumblings, ripped to shreds by Cosmopolitan and The Meredith Vieira Show, and my name was trending higher than Kim Kardashian’s the day she and Kanye West had a baby (see screenshots below).

There is no way to describe the feelings of instant fame, for it’s good and it’s bad.

The good flooded in first, and was amazing, wonderful, beautiful.  Stories of couples rekindling their love, seeing one another with “fresh eyes”, my wife and I stayed awake for most of 100 hours reading heartwarming comments of love, adoration, devotion promised to those we see every day as a new and fresh start among couples and families, stories of redemption among estranged lovers, children and parents, it was beyond description incredible.  It was overwhelmingly joyous to think our little simple experience had led to such emotion, passion, and rekindling of commitment in people around the world to love one another.

As the texts, emails, and then shares on social media from friends, family, and people we never knew we never knew poured in, our holiday season began with such a bang of happiness and excitement from so many, by the 4th day we were completely depleted and unable to contact anyone anymore.  At that point the post had been shared some 230,000 times, 81,000 comments, seen by 32 Million, page likes went up by 10,000, and that is all just from my page, not counting the millions that were then sharing it again from other sources, media outlets, and rewriting it in different languages.  Crazy.

Like I say, it’s impossible to describe the intensity of love we received from so many, loved ones and strangers, and every person in the world should be so blessed to have one moment as such in their lifetime.

Sadly, the coin flipped violently the opposite way so quickly we weren’t sure what hit us.  Sure, there was opposition to what I had said: I was accused of manufacturing a viral post, creating click-bait, and using family as a way to promote myself.  But then when the most famous social media presence in the pop culture world, George Takei, shared it with his followers, that is when literally all heck broke loose and we have never been so attacked in our lives.  The Army of Jason & Tami Hewlett protectors came out of nowhere and stuck up for our love story as if their own lives depended on it, but the messages in comment sections went from softball lobs questioning my intentions to downright attacks on our faith, love, and then the private messages for us to die or be struck with catastrophe.  Suddenly this beautiful thing became our own personal hell and we couldn’t wait for it to go away.

And it did.  Our 15-minutes were up quite quickly.  Almost as soon as the offers for extended fame came in, within a week they were gone and we were not of interest anymore.  It was fascinating to experience, the importance we felt on days 1-4, as I continued doing my December holiday party performances and people would gasp when they realized I was the author of the post their daughter from the other side of the world had just sent them…and yet by the 5th day how I was the most hated man in the world it seemed.  A week after the post I could barely stand to reference it, and then another country would find out about it and I would receive 2,000 friend requests on Facebook from South America and attempt to respond to each one personally. Champion Boxer Manny Pacquiao shared it as a faith promoting love story and it went viral again in the Philippines.  So bizarre.  We tried to capture our feelings in a quick YouTube video post, which is the most viewed video I’ve ever had as well.

Truth of it all is this: I have no idea how to create something like that ever again.  I actually hope it never happens again for most reasons, but sometimes things we share just happen to strike a chord.  But what it solidified for us was the importance of the overall message of the post – it was The Promise.  It became my main message, the proof I needed that the world was and is thirsty for people to Keep a Promise although we always assume the worst when we use words like “cheating” or “wandering eye”. It proved to me that I have a message that is quite important to share.  And there are people that loved it, couldn’t get enough of it, couldn’t believe it, and there were those that couldn’t stand it.  I get it.  But it led to a wonderful realization, not as to HOW it went viral, but WHY.

(Actually, we figured out HOW it went viral, that was easy – I have about 3,000 Facebook friends who are beautiful, wonderful, sweet and internet savvy Younique presenters who shared it like wildfire because they thought it was cute.  That’s the truth and I love those Y-Sisters of mine.)

However, The WHY it went Viral was because people love when we keep a Promise.

And they especially love it when a man keeps a promise to his lover.

I hesitate to share what we received from the experience.  The screenshots I grabbed from comments and messages are something that should probably be printed in a book for people to read with popcorn and root beer in bed late at night, laughing and shrieking and gasping and snorting at the audacity and hilarity and vile things people sent us.  Maybe someday I’ll put that book together with a very strong rating in place and you decide if you want to proceed with caution.  But I’ve included below some of the more interesting headlines, timelines, explosive numbers, comments, and how quickly my page likes went up in a week and how quickly I fell back off the face of the earth in the popular world as well.  It is fascinating to check out.

In the end we could only react one way: We could only LAUGH about it.  At some point the mean and the nice and all they say in between brings you to only be able to look at it from a 3rd Person perspective, not take it personal, and just laugh about it all, shake your head and say, “Wow, I can’t believe we made it through that.”

And then you go to Target the next time together instead of….well, you know. 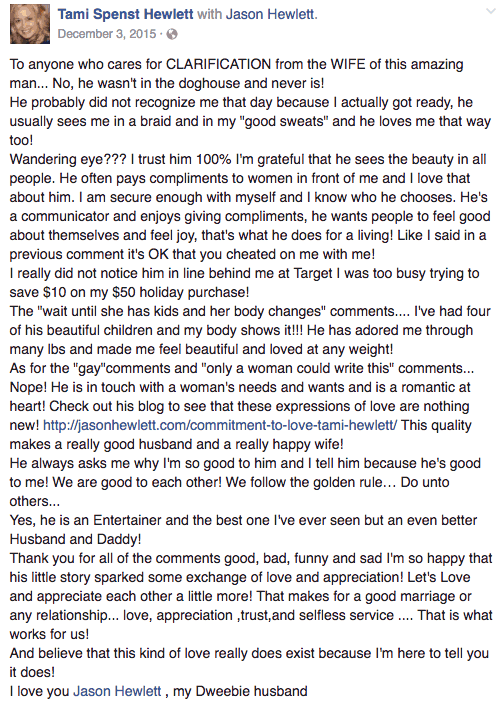 The Headlines from Around the World Some of The Nice Things People Said 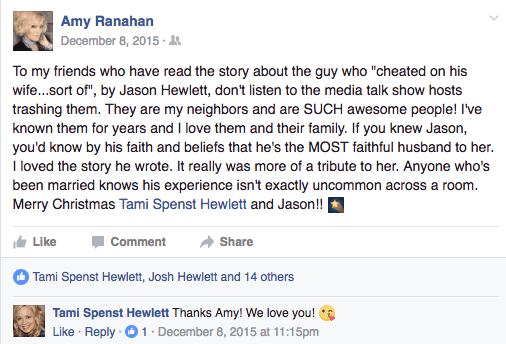 4 thoughts on “The Promise That Went Viral: 1-Year Anniversary of Seeing My Wife at Target”