Boys Get Flowers for Mom 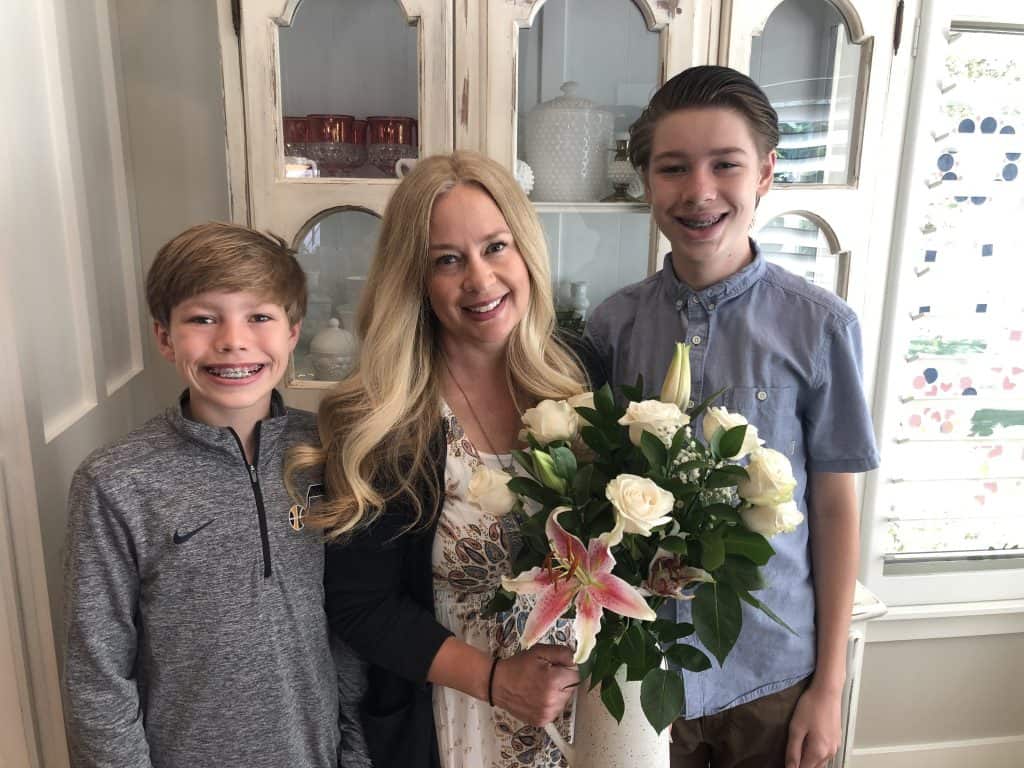 After every child had given Mom their handmade cards, tears shed as she read their sweet words, daughter promising to take Mommy to lunch the coming week, and watching the boys’ homemade movie for her, our two oldest sons said, “That’s not all!”

As they giggled and went out the back door and began rummaging about, we wondered what else they could have conjured for Mom.  Triumphantly returning with a bouquet of flowers they announced: “We got you flowers!”

A large bouquet of white roses placed in an empty vase they had found in the basement storage room.

Mommy knowingly looked at me and smiled, as I had purchased such gifts in the past and given them to the children to give to her.  But this time she saw the shock on my face as I said, “Where did you guys get those?”

Mommy laughed, looking at me, and said, “What do you mean?  Didn’t you take them to the store?”

To which the boys shouted with glee and told us of a grand adventure!

We live nowhere near a store that sells flowers.  I hadn’t taken them, either.  Due to the quarantine, we haven’t allowed the kids to go into any store for 2 months.

Then they recounted, as 12 and 13-year old boys, how they hopped on their little scooters, donning masks and gloves, cash in hand from their piggy banks, as they crossed major streets (even under a highway!), traveling a few miles in order to secure flowers for Mom for Mother’s Day.

I remember when they left – it was Thursday and I was on the couch typing on my computer late that afternoon.  It was sweltering hot outside and the boys announced they were headed out “to play”, as Mom was working on a project for a friend and out of sight.

Little did I know my sons would take a round trip of more than 2 hours to go into a store, pick out flowers, fearful for their lives to touch anything else due to the virus and the caution we have exercised as a family, spent their own money (their words – “Wow!  We didn’t realize flowers are so expensive!”), and then pushed their scooters, hands full, flowers balanced, flowers falling, flowers drooping, flowers swirling in the wind, back up the grueling hills to our house.

(They’d also purchased Snickers for Mom as well, and wrapped those in the flowers)

The adventure didn’t stop there – now it was time to keep flowers hidden from Mom until Sunday!

The boys laughed as they said they’d hidden them in the hall closet but noticed “The flowers weren’t getting any oxygen”, so they took them out to the backyard, hid them in a window well and kept them watered so they wouldn’t die in the heat.

We laughed as they told us this tale.

The boys had asked earlier, as we ate breakfast on the front porch, “Daddy, did you get flowers for Mom this Mother’s Day?”

I hadn’t.  Guilty!  And yet I usually do.  But this Mother’s Day I had given other gifts.

To which Mommy saved me by saying, “Daddy gets Mommy flowers on regular days, not just holidays, and bought all of these flowers on this porch for us as a family.  But him getting me flowers on Mother’s Day isn’t his responsibility.  Sons, when they are old enough, give flowers to their Mother.”  And she left it at that.

Little did we know the boys had such a scheme.

Little did we know they had worked so hard to honor their Mother on this day without any help from anyone else.

The boys have internalized The Promise of showing love, appreciation, and going to whatever lengths necessary in honoring their Mother.

Mommy was touched by all she was given this Mother’s Day, the wonderful handmade cards, the video, the lunch she will have with her daughter, and the joy of being together.

But she will never forget the day her 12 and 13 year old boys, by themselves, got her flowers for Mother’s Day.

Ready to become a better Speaker for your next Virtual or On Stage Presentation?  Let Jason show you how click here

2 thoughts on “Boys Get Flowers for Mom”