Last week I was the Keynote Speaker for 2 different companies who just so happened to book me at the SAME event center in the SAME city on back to back afternoons!  That is considered the greatest luck of the draw for someone in my kind of career and worth 3 exclamation points!!!

That meant I could take my best buddy, Royal, along with me for an overnighter, skip school, swim in the hotel pool, enjoy exploring the city, and have some one-on-one time with The Dude.

As we awaited the start of the 2nd event, we found a fun center where you can try AXE THROWING at a place called LUMBERJACKED – boom!

Royal was persistent in his request to try it and we paid for a half hour slot.

The instructor gave us some tips, such as best way to stand, hold the axe, and to not toss it to each other…

He then proceeded to easily flick the axe, hitting bullseye over and over again.

Royal went for it, and proceeded to stick the axe over and over, getting closer to a bullseye with each attempt, gleefully squealing with delight at the simplicity of this activity.

After about 5 tries, he hit bullseye.  This 10-year old athlete is quite impressive, and succeeds easily at every athletic endeavor he tries.  As a reminder, this is the same child who finally was passed the ball in lacrosse and proceeded to score 5 goals in a row.  He’s just a natural athletic stud. 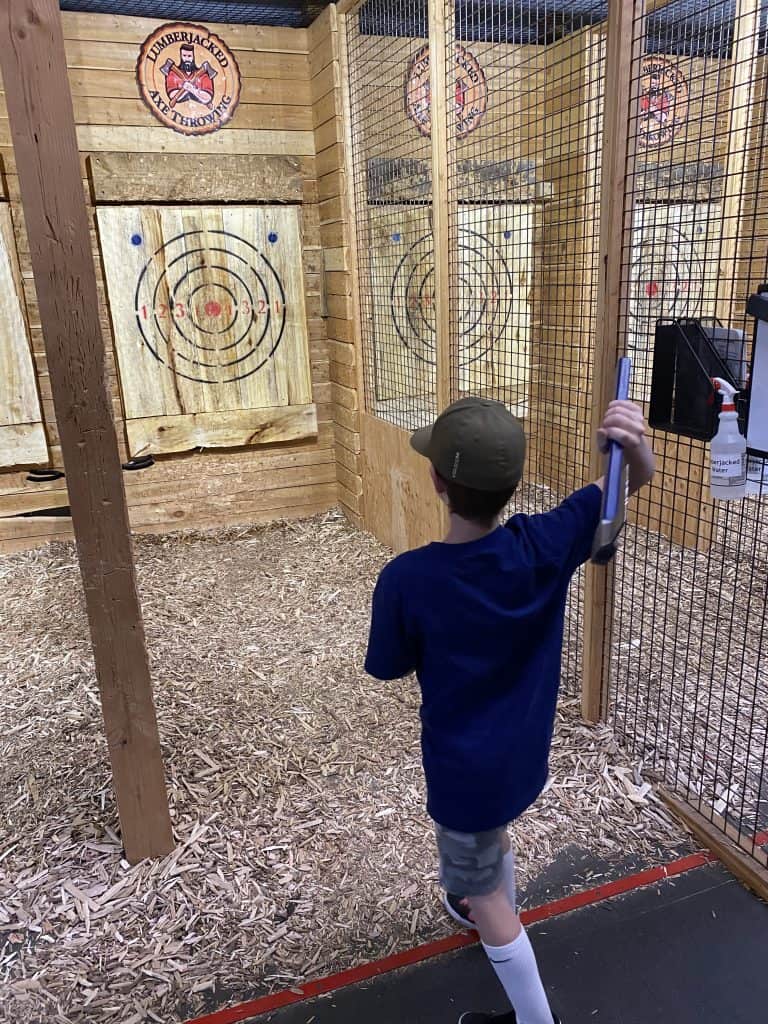 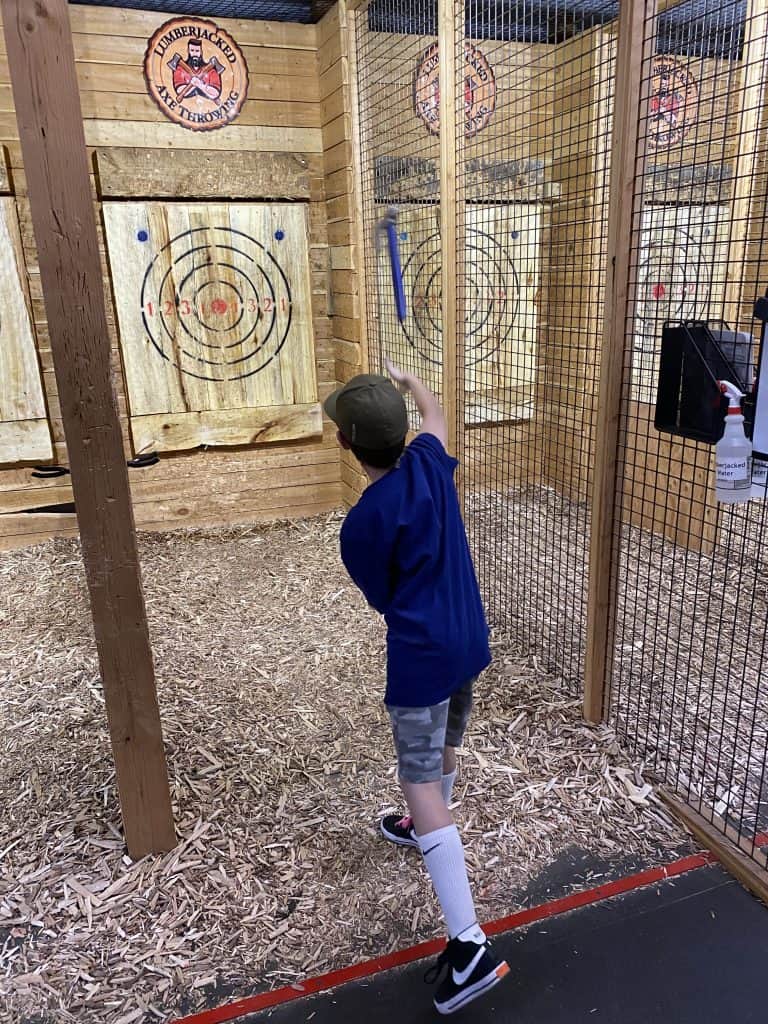 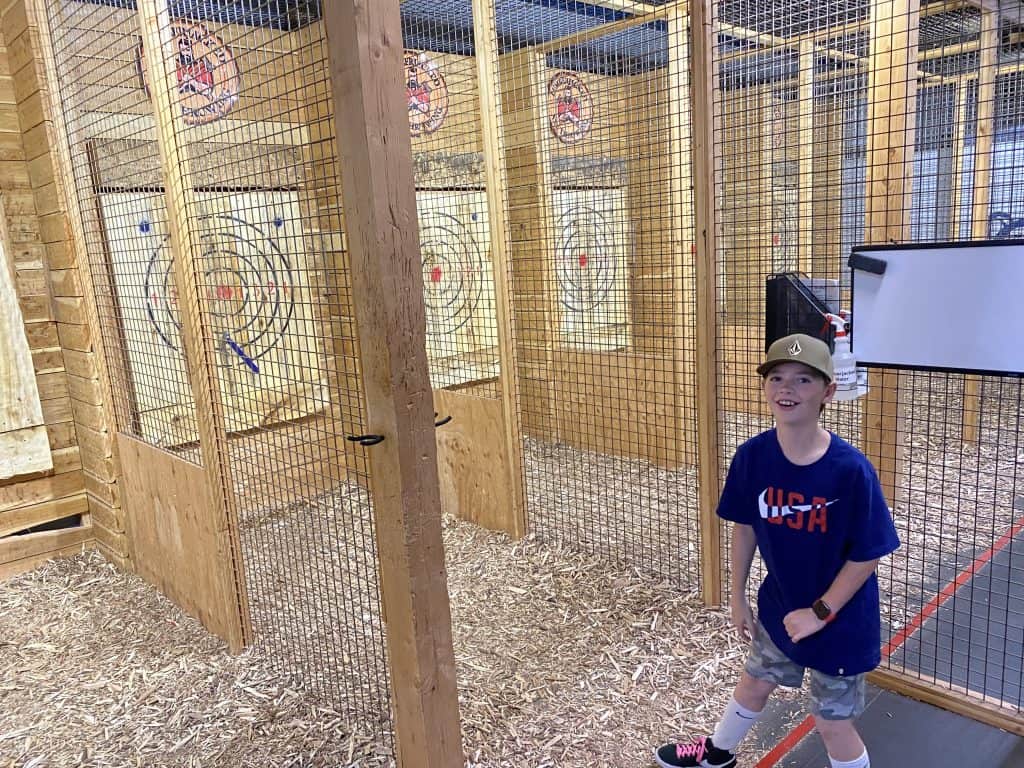 And now it was my turn to throw the axe.

I had just come away from rousing applause with an audience requesting my return in the future, then swam in the hotel pool impressing my son with my ability to hold my breath underwater longer than a whale (his words), and had a successful coaching call that morning.

He mentioned how my muscles were bigger than he remembered in my arms, shoulders and chest, and added, “Daddy, your muscles are huge!  Now all you need to do is add some abs!”  Hilarious.

Truthfully, I was feeling pretty good about myself.

And then I picked up a little axe.

As I did my best to stand correctly, hold the axe with focus and determination, it bounced off the wall 3 times in a row.  I laughed it off.

Throw 4, 5, and 6 were just as bad.  A sinking feeling of confusion hit my stomach, and then throw 7, 8, 9 brought the heat of embarrassment flushing over my neck and face.

With every toss I was dismayed to be unable to even stick the axe in the wall.

In fact, my son and I needed to continually jump out of the way as the axe violently hit the wall and came bounding back toward us, adding insult to near injury!

I doubled down, kept trying, throwing harder and harder, nonstop, to no avail.

No one was watching us, we were alone in the cage, but the eyes of my son were on me – my little boy, who so easily could do this simple thing, and yet I couldn’t even come close.

He and I were both surprised at my lack of capacity at this basic throwing of an axe.

I had succeeded at everything we’d done on this trip, and I’m sure it appears to his little eyes that I succeed at most activities I do consistently in everyday life, but this one eluded his old man.

I finally turned to Royal, flush with disappointment in myself, and said, “Well, Daddy can’t seem to figure it out.  You made it look so easy.  Can you show me how you did it?”

Royal confidently took the axe and instructed me how he did it.  He threw it softer, had a cadence and a rhythm, and most importantly he told me I had to smile.

Eventually I switched to my left hand to give that a whirl, and oddly, stuck the axe for the first time that way.

After more misses than makes, I finally got the hang of it to where I could use either hand, while my ego damage returned to just a slight humiliation, as my son continued to be semi-pro at this activity, we had a nice 30 minute experience in the axe throwing cage.

I was struck by the realization that my son had seen me mostly succeed on this trip, and how I took great pride in that.  And then we entered the axe throwing cage and I totally failed.  I have zero natural axe throwing ability.  He was confused as to why I wasn’t good at it, either.

What was important to my son was that I kept trying, and to see his Dad not be great at something is important, and him being better at it than me, made him feel good about himself.

Most importantly to both of us: We were together.  Fully present.  Phones only used for capturing the moment in photos.

We had a good time even if I wasn’t very good at the activity, and he mentioned he was grateful we had this new father-son experience.

I’m grateful for a 10-year old son who can be ok having a Dad who can’t throw an axe well, but still thinks I’m worth hanging out with.  Later that afternoon I received a standing ovation at my speech, and a bonus on my check, from a grateful client for a performance I’ve worked really hard to make great.

But it will take a long while before I can throw an axe well, yet Royal will invite me to go watch him hit a bullseye anytime, and I’ll gladly tag along.

The Promise is to keep trying, keep smiling, and hang out with my son as much as humanly possible while he still wants to.

8 thoughts on “Axe Throwing with Royal”